Saturday passed and it is now two hours into Sunday, so this post is a bit late. But the news will hopefully be interesting to you anyway! I have uploaded two new free website templates, called [Variant Rounded->https://andreasviklund.com/templates/variant-rounded/] and [Variant Portal->https://andreasviklund.com/templates/variant-portal/]. As I have in the past, I try to keep the designs simple and useful. Variant Rounded is an 800px-friendly template with more design than content in its basic 3-column layout. Variant Portal is lighter, less colorful, 1024px-friendly and made for sites with more text content that needs to be in focus. Both templates have been tested in multiple web browsers and on mobile devices, and I have not found any problems. The code is valid XHTML 1.0 Strict and CSS2. Basic accessibility features are included, such as skip links and full functionality with screen readers. Like most of my previous designs, these two new templates should be perfectly functional even in browsers that do not support CSS, thanks to the simple code structure. 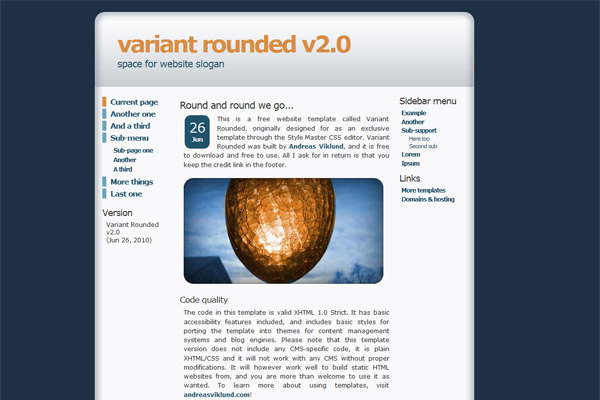 Hello Andreas!
Great news to have your themes back! Really liked the Variant Portal – straight to the point.
If it’s not much to ask, would you share with us if you have plans to release new themes and what/when should we expect anything?
Cheers!

Variant Portal looks really promising. If I had one wish granted, I’d love to see alternate colour schemes, to add a little warmth for instance. Would you consider this as an idea for a future release?

The Variant Portal looks great to me and I agree with Leandro that it’s great news to see you back, alive and kickin’;-) I also agree with Natalya that a colorscheme would be great. Would it also be possible to have the Variant Portal available with only one navigation at the right side? Two of them looks a bit overdone, although once again, with all the work you have done, you’re a credit to website developpers!

Leandro: During the last couple of weeks, I have worked with finishing several template design ideas from my “unfinished” and “unreleased” folders, as well as creating some new ones. There will be more releases for sure, atleast one new template every week during the summer. Refreshing (or rather rebuilding) the WordPress themes is also a priority, as well as working on a new and improved andreasviklund.com with more related material.

Natalya: That is a good idea. The plain style is intentional, but it would be useful to have options for simple customization added to the template. It would be easy to add, I’ll consider it for the next version!

Hans: When I made Variant Portal, I also made an alternative version with a single sidebar and a smaller feature area. More of a classic blog layout, probably. I considered including it as an alternative stylesheet, but decided against it to keep the template as simple as possible. I will probably release the alternative version separately soon. Including the possibility of easily removing one of the sidebars while keeping the button styles may possibly be added in the next version.

Variant portal reminds me to Carrington but this one is much more better. Simple and Elegant. I like it. Thanks Andreas for providing both for free. That’s very kind of you.

I’m planning to make a mini site, It seems that Variant Rounded v2.0 looks suitable for my project. Both website themes looks great. I’ll try on my localhost first. Thank you Andreas.

Very good! I want the second theme: Variant Portal :-) But I wanna change some colors there. Nice work!

Another wish for the wish list is a template that looks like BentoBox, but that is free. (I think we are getting spoiled here ;)

Anyone given it a serious try to create Joomla 1.6 templates yet? (it’s in beta 3 now) Making some templates available for Joomla 1.6 would be a great way to make this site even more popular I think.

These two are amazing. I’ll download them. So, you’ll produce some more website templates this summer ya Andreas. Good luck! and Thanks!

Hello Andreas! I like the rounded corner and navigation style on Variant Rounded V2.0. You rock!

Andreas, another excellent effort. Your themes continue to impress me with their clean, intuitive interfaces. Did you do any work in the web usability sphere?
Also, hope you are feeling better.

Great work, i like the Variant Portal but will it maybe use with pastell colors.

The both are clean and beautiful themes.
Is “Variant” the name of your new theme serie, like the previous ones “Andreas” and “Daleri”?

Variant Portal and Variant rounded are two good reasons for having you back :)

At 21kb I thought that Rounded was pretty cool. And then you blew me away with 4kb for Portal!

Great to see you back in action.

I look forward to the release of your WP themes.

Good job! Great to see you back in business. Hoping to see some new WordPress templates soon, hopefully some that are “premium” looking but no extra functionality required, just awesome looks.

I agree with all positive comments: good job!! :)

Great work! The second one looks really clean and simple.

There is actually one thing i would like to see from you. A wordpress theme based on CSS. Only CSS and nothing else. That would be very interesting.

Keep up the good work budd!

The ability to change the main colour on variant Portal would be a nice feature. I like to use blue like you have up in your header section.

Great work! Waiting for more of course :)
Some premium-looking maybe?
Thank you!

The templates look nice. however I think that you should not make templates without a single front image in them (Variant Portal). The first one (Variant Rounded) looks very nice to say the least!

Keep up the good work and thanks a lot.
What else should I say?, Yeah, the themes are just great :-)
South America – Brasil

That’s great to see you are back with two new themes. I really like the variant portal. Keep up the good work as it certainly is appreciated!

Hi Andreas,
Nice to see that you are back in business and hope you are doing well. I will sure check out the new templates you are releasing. The two above looks nice.

Hello Andreas, I have been following you for a while now and have been really impressed with your content here on this site. These two templates look great, I especially like the second one due to the dual sidebar. Keep up the great work.

Nice work! Most of them i like the Variant Portal-Template.
I’m looking forward to see more of your impressive work.

Hello : I discovered your wweb site today searching for a customizable templates for my wp blog and what a great discover !
VariantPortal is exactly what I have been searching since a while. It is unbelieveable how it is possible to find almost anything (something I imagined) but only if you invert some hours… ;-)
Many thanks for this template that it is EXACTLY what I searched !
Bernard

Good job, Great to see you back in busines again
thx.

That Variant portal theme could actually work very well for a business news blog I am starting. Variant rounded is probably a little too simple for what I am doing now, but I can see how it would be perfect for some.

Wowww, Super, and The templates look nice. however I think that you should not make templates without a single front image in them (Variant Portal). The first one (Variant Rounded) looks very nice to say the least!

Variant Portal is simple but has an outstanding appeal. I’m planning to used this in one of our business blog. Indeed, Simplicity is beauty

Variant rounded has no menu in the center?

Hi Andreas,
I am also pleased to see that it is raging once again on your website.
The new templates look very good.
Your fan Mason

i have been your fan for a long time. i used your free themes in some of my projects. thanks, keep it up!

I’ve have recollections of porting Variant Portal to WordPress for you a long time ago. Did you keep the WordPress version? I think I may have it somewhere…

Variant portal reminds me to Carrington but this one is much more better. Simple and Elegant. I like it. Thanks Andreas for providing both for free. That’s very kind of you

You are so skillfull!
Thanx for putting out your work!

Variant portal reminds me to Carrington but this one is much more better. Simple and Elegant. I like it. Thanks Andreas for providing both for free. That’s very kind of you

Really nice template, it is very elegant and easy on the eyes!

Hi Andreas
Nice template. Hope that there will be more.

Good morning Andreas, I have been very impressed with your content here on this site, it is always a pleasure to pop by. These dual sidebar template is definitely my favourite. All the best.

The templates look nice. however I think that you should not make templates without a single front image in them (Variant Portal). The first one (Variant Rounded) looks very nice to say the least!

this one is much more better. Simple and Elegant. I like it. Thanks Andreas for providing both for free. That’s very kind of you.

nice template, i like both. but if this color’s green it’s great.

Hi,
Is it possible to ported Variant Portal template to WordPress ??

Yes we need it in wordpress

It was really nice work by the andreaves, great work