I have a lot of different web browsers installed, but the one I use most often is Mozilla Firefox (currently version 6.0.2). To make my daily work easier, I use a number of Firefox extensions. One such extension is essential for testing and quality-checking my designs: The Web Developer toolbar by Chris Pederick.

What is the Web Developer toolbar? 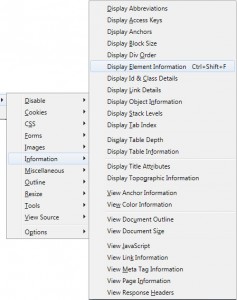 It is a browser addon for Mozilla Firefox, that puts a lot of extra tools in a separate toolbar and in the right-click menu of the browser. Among the tools are HTML and CSS validation tests, accessibility tests, script and image blocking features, layout information displays such as block sizes and code structure, quick links for viewing the source code – and numerous other useful features that I use every day. Many of the included tools can be useful not just for development work but also for getting an idea of the structure of a website as well as finding individual values for specific objects in a layout.

The toolbar is available both as a separate extension and as a part of the Web Developer’s Toolbox collection which also includes a couple of other addons that I use (mainly Firebug and Greasemonkey). It has been used in the construction of all my templates and themes, as well as for building this very site. Among my favorite features is the “Display element information” mode, which shows detailed information about any part of a layout that the marker is pointing on.

The Mozilla Firefox web browser, but similar extensions are available for other web browsers as well. A version by the same developer but for the Chrome browser is available in the Chrome Web Store.

Who can the Web Developer toolbar be useful for?

Can I recommend the Web Developer toolbar?

This is one of my favorite browser addons, one that I would not want to work without as it makes several parts of my design process much more effective. I recommend it for anyone interested in web design, both beginners and professionals. If you want to get an idea about other users opinion, check out the reviews for the Web Developer toolbar on its addon page on Mozilla.org.

I have just recently downloaded the Web Developer toolbar and I love it! It is absolutely perfect for a beginner like myself who has been interested in web design for some time now. I highly recommend it! Thank you to Firefox!

I’m an early adopter of the web developer toolbar since the first version.
I’ve got to say that after many years, I found myself using more Firebug than the WDT.
I like it more probably for its visual help to debug the layout, a big drawback is that firebug makes firefox really slow in my experience.
Anyway these two tools make firefox the best browser for web developers.
Nice article.
M.

Thanks Andreas, read your review and have switched to this toolbar now, I also use firebug and agree with Michele that both together make a great team, great article.

read your review and have switched to this toolbar now, Thanks Andreas

Andreas, thanks a lot for this toolbar.

Hello, Andreas. I am very much a beginner in the website design area – but I found your review of the Web Developer toolbar useful and thought that I would try it out. Yes, I agree with you, it is a very useful and versatile browser addon (although I have yet to explore all its functionalities). Thanks for sharing and best wishes.

Thank you so much Andreas, after I read your review I started using this toolbar.

I have recently install this web developer tools in Mozilla. Now I use it constantly for the live CSS edit extensively and the new color formatting is great.

I have few web development toolbars in my web browser and they are quite handy and useful to a beginner like me.