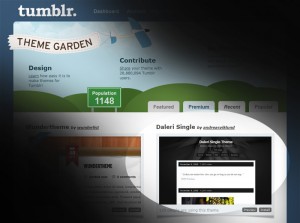 The Daleri Single theme for Tumblr has now been reviewed, approved and added to the official Tumblr theme directory, the Theme Garden. When I write this, the theme has already been installed on over a hundred blogs. I will browse through as many of them as I can during this weekend to see how the theme works with different kinds of content. If you are using the theme, don’t hesitate to contact me if you have ideas, suggestions or feature requests!

I am now working on creating a second theme which will be announced in a few days, and as mentioned in a previous post I would be happy to get more suggestions on which templates you would want me to convert next. Share your opinion, I am all ears!

The Asokay theme for WordPress 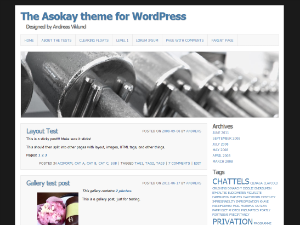 Great themes. I like the first one more. Good job.

Hai, love your templates, but have one question (couldnt get registered with the forum so i am trying here if it is ok with you i hope) how can i get the alt message on an image to work. Now when i hover an image nothing pops up. Can this be changed? hope to hear from you! have a very nice day!

Try to add title=”Text you want to pop up” to the image, it should work better. But keep the alt anyway, it is good for other reasons!

YES!!! it works! thank you very much and have a nice evening!
Bloempie